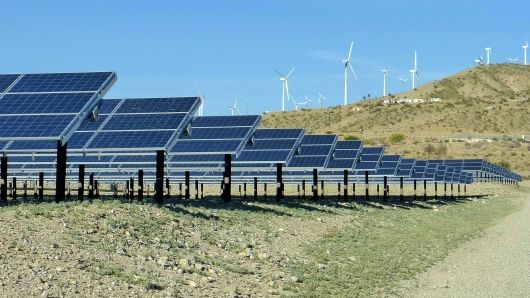 In a not-too-distant future, renewable energy becomes the world’s biggest source of power generation. A quarter of the distances that humans travel by vehicle will be in electric cars. U.S. dominance in the oil market begins to wane, and OPEC’s influence is resurgent, as crude demand finally peaks.

That is the vision laid out by British oil and gas giant BP on Thursday in its latest Annual Energy Outlook. The closely followed report lays out a vision through 2040 for Earth’s energy future, provided government policy, technology and consumer preferences evolve in line with recent trends.

BP forecasts that the world’s energy demand will grow by a third through 2040, driven by rising consumption in China, India and other parts of Asia. About 75 percent of that increase will come from the need to power industry and buildings. At the same time, energy demand will continue to grow in the transportation sector, but that growth will slow sharply as vehicles become more efficient and more consumers opt for electric cars.

But despite the increase in supply, BP thinks two-thirds of the world’s population will still live in places with relatively low energy consumption per head. The takeaway: The world will need to generate more energy.

Most of that new energy — as much as 85 percent — will come from burning natural gas and drawing on renewable power, according to BP’s main scenario.

By the end of the next two decades, BP thinks renewables will provide most of the world’s electric power, as wind, solar and other renewable energy sources spread through the system at a faster pace than any fuel throughout the course of human history.

Meanwhile, natural gas consumption will grows by 50 percent over the next 20 years, increasing in virtually every corner of the globe, the forecast said. The electric power sector and industry will drive the increase, though the fastest growth will be in the transportation sector, albeit from a low base.

BP sees most of the new supplies coming from the U.S., Qatar and Iran, with China and Russia playing a smaller role. Also during the period, shipments of liquefied natural gas — a form of the fuel chilled to its liquid state and exported by ship — will continue to grow, ultimately accounting for 15 percent of gas trade by 2040.

Throughout most of that time, the world will continue to consume more oil year after year, until demand ultimately peaks around 108 million barrels per day in the 2030s. This year, OPEC expects global oil demand to reach 100 million bpd.

Despite the anticipated plateau, BP says the industry will have to keep investing in new oil production to meet growing consumption and account for declining output at legacy fields. The biggest source of demand will continue to be transportation, with consumption for planes and ships growing by 3 million barrels a day and the world’s road fleet guzzling another 2 million barrels a day by 2040.

Most of that demand is seen coming from emerging markets, where the middle class will expand, especially in Asia. For the first part of the next two decades, the U.S., Brazil, Russia and other non-OPEC members will meet most of the world’s growing appetite.

But towards the end of the period, BP sees output declining from U.S. shale fields — the engine of the American oil renaissance — and OPEC reasserting its dominance. The Middle East-dominated group’s production will increase by 4 million barrels a day through 2040, with most of that growth happening after 2030, BP says.

However, BP sees a scenario where low-cost producers like Saudi Arabia, spurred by the looming peak in demand, pump at full throttle, driving down prices and increasing demand for oil.

The picture is more complicated for coal. On the whole, coal consumption would flatline, as China and developed countries quit the fossil fuel in favor of cleaner-burning and renewable energy sources. However, BP sees India and other Asian nations burning more coal to meet surging power demand as the nations become more prosperous.