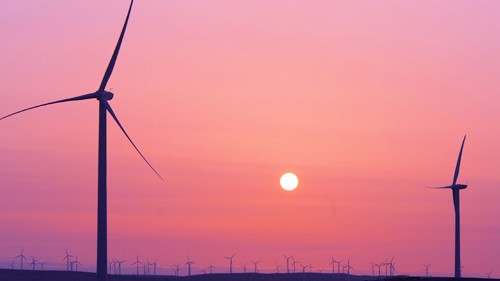 Wind, solar and natural gas have the lowest levelized cost of electricity (LCOE) in the majority of counties across the United States, according to a new report from The University of Texas at Austin’s Energy Institute, part of a series of white papers on the Full Cost of Electricity.

The report breaks down the costs of each resource by county and found wind to be a cost-competitive electricity source across all parts of the country. When environmental externalities and availability areas are factored into the analysis, wind fared even better. In the areas where wind was not the lowest cost resource, it was often the second lowest, with the average difference between the first and second least cost technology for all locations at $0.029/kilowatt hour (kWh).

Looking at the full picture

Beyond a traditional LCOE analysis, this research adds value by considering environmental externalities and geographic differences. Scenarios considering environmental externalities produced by each form of power generation, including air and carbon pollution, and embedded life cycle analysis greenhouse gases, allow for a fuller comparison of costs across technologies.

Furthermore, most LCOE models do not account for the different costs of building and operating an identical power plant across differing geographic regions. This analysis expresses the spatial differences of the costs of each technology across the entire United States. Because capital and operating costs, fuel price, emissions, capacity factors, and others issues vary across regions, so does the LCOE. This study considers the cost of labor, financial support from the government, and supporting infrastructure to deliver a “full cost” of each source of power generation.

Where and why wind is cheapest

Changes in generation technologies have supported a shift in the dynamics of the electric power industry. The evolution of technology has significantly contributed to declining costs of renewable energy, paired with an increasing number of competitive electricity markets and stringent emissions standards, to create favorable market conditions for wind. In fact, wind’s costs have decreased by 69 percent since 2009, making it the cheapest source of new electric generating capacity in many parts of the country. Increased consumer education and awareness of the economic and environmental benefits of renewable energy has helped to expand the market for wind and solar as well.

While this was the high-level conclusion, the analysis also provided the lowest LCOE in each county under the changing scenarios. For example, as shown below in Scenario 3, with the minimum cost technology, including externalities, wind is the lowest cost option in the most counties, with combined-cycle natural gas following as the least cost option in counties where the wind resource is not as strong.

As shown in the Scenario 3 map below, wind is the cheapest option across the central plains and the Appalachian Mountains, natural gas across the coastal plain and parts of the northern Rocky Mountains, and solar leading across the Southwest. Across the central plains, there is an excellent wind resource with a high capacity factor. This capacity factor coupled with the environmental advantages wind has over other fossil fuel generation technologies allows it to have the lowest LCOE in this area. As another benefit, wind as a source of electricity is not vulnerable to fluctuating fuel costs (whether that be the actual price of gas, or an external cost associated with carbon) that allows wind to be predictably low cost and stable.

The study also developed an online calculator tool to allow various stakeholders, including both policymakers and the public, to estimate the cost implications of policy actions. This tool also provides a high level of transparency of the inputs used in calculating the various LCOEs. It is helpful in determining which factors have the largest impact on the overall cost to produce electricity.

Researchers also ran the numbers without considering environmental externalities and found natural gas to have the lowest LCOE for the majority of U.S., but wind still having the lowest cost across the Great Plains and in upstate NY. However, it is important to note that combined cycle natural gas plants and nuclear generation are sensitive to natural gas and carbon prices while wind and solar are not. Utilities are able to buy wind and solar at fixed rates, which ultimately protects consumers from potential increases in fuel prices.